This following post represents the collective experiences and thoughts of three women who set out on a 1,500 mile trek across West Texas in December 2003. This is their “Road Trip: Big Bend.”

Presidio (pop 4,167) was the largest town we visited since Fort Stockton. The Mexican influence was obvious in this bordertown, and we drove through rather quickly intent on a visit to Mexico.

And so we drove, through Presido, through the border patrol, over the bridge and on into Ojinaga, Mexico. Encapsulated in our American SUV, we looked out the window into this dusty, congested town bustling with activity—car dealers, restaurant, pinata stores and street vendors.

It was at the first intersection that I realized this was not what I expected. As we sat at a red light, ready to head right, the car behind us beeped its horn. I looked up to see if we could take a right on red and saw not one sign in English! Storefronts, street signs…all, of course, in Spanish!

There has been no easy transition from English to Spanish, from America to Mexico. We were on foreign soil, so foreign that even our adventurous souls agreed to turn around. And so we drove right and then left and then right back to the border crossing, where we spent more time waiting to get back into the U.S. than we did in Mexico! 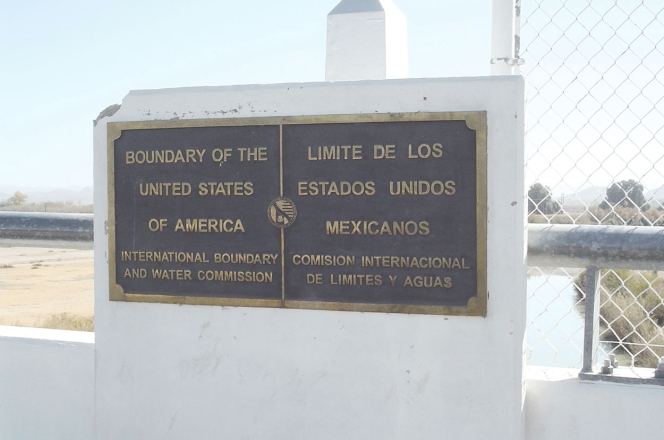 In our seats, we waited as patiently as we slowly approached the ominous border patrol. Forty-five minutes later, DeLinda rolled down the window and the border patrol officer asked if we were all U.S. citizens. In unison, without a word, the three of us held up our driver’s licenses and smiled. The officer almost laughed…these three pale white women in red bandannas with travel brochures and beef jerky strewn across the front seat. U.S. citizens indeed!

Mexico behind us, we appropriately stopped at a Presidio restaurant, El Alamo, and feasted on salsa and chips, tacos and burritos.

Driving back the River Road, we saw backwards where we had been, and stopped along the way to snap photos we had missed on our earlier journey. Weary, we camped out at the hotel for the night. Tomorrow, we drive home…