This following post represents the collective experiences and thoughts of three women who set out on a 1,500 mile trek across West Texas in December 2003. This is their “Road Trip: Big Bend.” 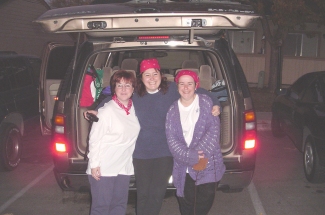 We began before Friday even showed itself—the three of us packed into our rented Chevy Suburban.

“Not an SUV,” said my sister, with not so subtle anti-establishment undertones. In the end, I think she was most grateful for the space, as it afforded her room to nest and knit, watch and relax…finally.

For all of us, this trip was about relaxing—stopping—more than anything else. My sister, in her second year of grad school, had not lifted her head from a book in more than a year. DeLinda had been juggling multiple work responsibilities, a new house, and family concerns. And I had been at the computer in a six month marathon of just too much work.

And so we chose to stop…pile weary bones and brains into our mighty SUV and travel nearly 600 miles across West Texas to see Big Bend National Park. Our “Road Trip Big Bend.”

In honor of our adventure, DeLinda gifted us with t-shirts she had made, imprinted with our “Road Trip Big Bend” logo. I brought red bandannas for each of us. And so adorned we left Austin on that first day just past seven.

You could hear the weariness in our silence. Imagine three woman about to embark on a four-day road trip with barely a word spoke between them. Imagine!

Instead, my sister knitted meditatively in the back seat. DeLinda comfortably assumed the role of driver as I sat mesmerized by the endless horizons of Texas countryside—low scrub trees and prickly pear cactus dotting endless miles of ranch, farm land and highway.

The back seat was stocked with our food for the trip: fruits and cheese, crackers, sandwich fixins’, goldfish crackers, bagels, breakfast bars, and a box of Christmas cookies DeLinda brought from a cookie swap earlier in the week. Our supply of beef jerky never dwindled, as we stocked up regularly. While our visit to Whittington’s in Johnson City—the absolute best place for beef jerky—was an hour too early, we managed quite well on varieties sampled at every stop along the way. To be honest, I don’t ever recall walking into a convenience store with the sole mission of finding beef jerky, but such was the case. Beef jerky for breakfast? Yes, delightfully, every day.

Along the way, we passed giant wind farms. Resourceful ranchers and oilmen have assumed stewardship of the wind, harnessing its power via these great windmills. They appear to grow from tops of mesas and up from the fields—like a science-fiction landscape, eerie and mysterious.

Three windmills stood on high looking quite biblical. It would not be the first of such references—even our excursion into the desert, itself, seemed symbolic. With a foreign dryness that left both mouth and skin parched, we were lucky that our stay in the desert was a mere four days, not 40!

“Marathon is the gateway to the northern entrance of Big Bend National Park, via Highway 385. This route from Ft. Stockton south through Marathon and on to its end at Persimmon Gap roughly follows that of the great Comanche War Trail. About five miles south of [Marathon] lies the site of old Ft. Pena Colorado. In 1879 the fort was established to stave off Comanche and Apache raids…. In 1881, the Southern Pacific railroad arrived.

Marathon is nestled in the heart of the grassy rangelands of the Marathon Basin. It is cattle country and it is on the railroad lines….One notable cattle baron was Alfred Gage, the owner of 600 sections (384,000 acres) of grazing lands. In 1927, the Gage Hotel was built to serve as his headquarters. Another cattle magnate, Captain Albion Shepard, named the community Marathon because it reminded him of the lands around Marathon, Greece.”